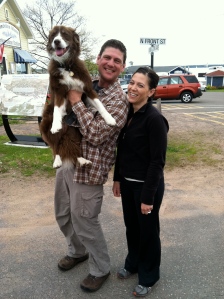 Best friends I never knew I had

Sometimes you get lucky.  I did, Wednesday, May 25th at Roy’s Point.  “That man and that dog” from last week\’s post are Jeff and Sidney, respectively.  I met Diane, Jeff’s lovely wife, the next day.  As far as my good luck was concerned, I was definitely on a roll.  Jeff and Diane opened their hearts and home to a stranger and treated me like a long-lost friend.  Roy’s Point Marina and the Brickyard Creek community share the same small arc of land just south of the Red Cliff Indian Reservation and just north of the town of Bayfield.  Wednesday evening I was given guest privileges which included a hot shower, club house comforts and a space for my tent.  Jeff, Sidney and I continued our afternoon conversation later that evening accompanied by a  few beers and one of the quietest Lake Superiors you’ll ever get to see.  As Jeff and I talked it became clear to me I’d met someone who I not only enjoyed listening to but who also shared my passion for the outdoors in its natural state.  Eventually, the beer ran out (a third “guarantee” to add to death and taxes), the sun dropped and the evening chill set in.  Jeff and I were both shivering by the time he headed home and I to my little tent on the point.  I anticipated an early start.  The forecast was for 20 mph winds later that night, some calm in the morning and increasing wind again by noon.  I hoped to be standing on the sandy beach by the ferry landing in La Pointe long before then.

Coming Up – Best Video to Date – but not quite yet

At 1:00 A.M., it seemed my luck had changed.  I woke to a roar of wind and surf.  I’d paddled in 5 to 10 mile an hour winds but at 20 and climbing, this Lake Superior was new to me.  It was a Northeast wind with a vengeance.  I wriggled out of my mummy bag (I learned to do this without lowering the problematic zipper) and headed for the beach.  The breakers were steady and tall.  My canoe, though tied up to a tree and 15 feet from the afternoon surf was now being splashed by the waves.  If Pelagie, my trusted water pony had the power of speech, she would have been begging me to move to higher ground.  I hauled the canoe off the beach and up the point to the grass by my tent.  I tied her down and now, thoroughly chilled, crawled back into the tent.  In a flash it was 6 A.M and a peek outside the tent showed me that there were no signs of this lake calming down.  Launching was not a possibility.  With Lois and our friends arriving later that day an unwelcome scenario presented itself – that of celebrating with these friends on Madeline Island, having arrived by ferry rather than canoe, then bidding them adieu and heading back to Roy’s Point to finish the trip.  I would do it if I had to, but I certainly didn’t want the trip to end that way.  A call to Jeff, and I had assurance of a safe place to stash the canoe and gear until I could return.  In addition, he was on his way down not only to help me with my stuff and haul it back to his and Diane’s place, but a steaming Latte was added to the mix.  It didn’t hurt that Jeff’s business is coffee.  My fast forward to Lois, Laura and Chris’s arrival at the house would include a nap, reading the introduction and first chapter of the amazing, Man Who Walked Through Time, by Colin Fletcher, a gourmet panini at lunch and still, more lively conversation with Jeff and Diane.  To put it in plain hippie speech, I was absolutely blown away by their generosity.  Whatever luck ran out with the Big Lake Wind, it was a waning puff compared to this steady breeze of kindness.  When my gang arrived around 3, we said our goodbyes to our new friends, loaded my gear in the car and took a drive down to the marina for a last look at the lake before we headed to the ferry in Bayfield.

Bayfield and La Pointe – The two last red flags across from each other at the bottom of the photo. Roy’s Point is one flag up from Bayfield 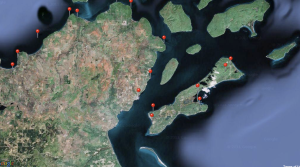 Bayfield Peninsula and the Apostle Islands

Miracles of Miracles (though truth told, I don’t believe in them – but the wind…had…changed)

Here’s what I’ve been told.  Before the car stopped, I was out of the car.  I do remember seeing a lake void of whitecaps with a diminished surf and a decidedly eastern breeze.  That NE blow that had prevailed since the early morn was done.  I’ve also been told I fell off the rock I was sitting on while trying to shimmy into my wet boots.  I do remember paddling away from shore only to realize my life vest was stashed out of reach and then, paddling back, finding it and putting it on.  I remember practicing some deep breathing with daughter Laura in order to settle down a bit.  Then, I pointed the bow into the light chop and headed for Madeline.  To say I was slightly nuts with anticipation would be an understatement.  I felt like the wind could change back at any time and it wasn’t until I was well on my way that I finally relaxed, stowed my paddle and just took it all in.  I thanked Pelagie for her faithful service and I even made up a silly song which now I can’t remember.  I let my eyes rest on the incredible beauty of the surrounding islands, the water, and the mainland.  I did a few 360s in the canoe to get the full effect.  Calmer, and happy – I was expectant but no longer frantic.  Even if the wind switched back and the waves became topped with foam, I was now on a trajectory that would keep the breeze behind me and ensure a reasonably short surf to Madeline.  Back at Roy’s Point, I’d changed my destination to the closer, Grigg’s Landing, the winter road access and not far from town.  This change would make the trip shorter and by landing there I could avoid dealing with the ferrys coming in and out of La Pointe.  As I approached Grigg’s, I could see that the ferry was more than three-quarters of the way across and most likely carried Lois, Laura and our friend Chris.  I also realized that I didn’t want to land at Grigg’s Landing.”  “Grigg’s Landing” did not sound at all like “La Pointe.”    No offense to Mr. and Mrs. and all the little Griggs, but tell me, where is the poetry in “Grigg’s Landing?”
I was now determined to complete my journey as originally planned.  The breeze had stiffened and the surfing was a bit more “Hawaii Five O”  but it became obvious to me that Madeline would stand between the breeze and me and that my landing at La Pointe harbor would be a calm one.  I saw 1,2,3….4,5 folks waving from the dock.  The ferry had landed, unloaded and was about to depart.  Dale and Gordon had joined the original three by catching the same boat at Bayfield.  Here’s the video that Dale shot and edited and that I picked up earlier this morning.  It’s not the final cut, but it tells the story well.

This trip’s unexpected revelations center around friendship.  I hope you got a sense of that in this post.  Thanks for checking in.  Am I done yet?  Well, no.  Next post I want to show you photos from three lovely days on Madeline Island – and a glimpse of the fun my pals cooked up.  Now,  I’ve convinced young Max of Bayport, MN that Madeline Island is his next vacation destination.  I hope this next post convinces you as well.  Keep your paddle in the water – Corey