Elvis and The Supernatural Woods at Grey Cloud Island

Before I try to unravel the mystery surrounding Grey Cloud Island, as promised, here’s the first installment of River Tales, a new feature for the blog.  I’m drawing from material in B.A. Botkin’s amazing collection stories, ballads and traditions in his Treasury of  Mississippi River Folklore. Meet Charles Henshaw, reporter for the Rivertown Gas and Dispatch newspaper as he interviews old-timer and river engineer, George Heckman. Think a cross between Walter Brennan and Bob and Ray if they had been cast in a radio version of Little Big Man Meets Deliverance. This is what happens when you turn a man loose with Garage Band.  I hope you enjoy it. 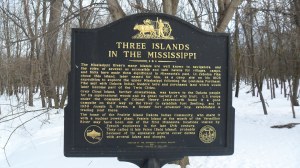 Take a closer look at the image of the plaque to the right. You’d come across this marker if you were to ski or hike the trails on Pike Island (visit two previous posts, The Big Thaw and Bike, Hike or Have a Good Cry).  The marker briefly describes a second island in the Mississippi, Grey Cloud or in the Dakota language, Ma-Hpe-Ya Ho-Ta Win, named for a Dakota woman, Grey Cloud Woman who lived on the island in the 1800s.  Grey Cloud Island is important to the Dakota people who lived and live in the valley and also significant in the Euro-American settlement of the area being the camp ground for Colonel Leavenworth on his way up the Mississippi to begin work on Fort Snelling.  But, what’s supernatural about the woods on the island?  Last week I tried to find out – virtually, that is, being a bit of a scaredy-cat myself.

St. Paul Park – Grey Cloud Island – Unimproved roads surrounding – There are two interesting haunted locations in this area. The first is a small cemetery located about 150 yards off the main highway. On moonlit nights, an indistinct figure can be seen leaning against a gate post smoking a cigarette.

Folks, we may have solved one mystery, eh, while trying to solve another one. Now, who would have thunk.  Okay, but you’re saying, “this is not what the Dakota people experienced in the time preceding Euro-American contact.”  A little more to the point perhaps was the reference to a mysterious Beech Tree that I found in two publications.  Curtiss-Wedge\’s History of Goodhue County Minnesota and Upham\’s Minnesota Place Names: A Geographical Encyclopedia both quote from the journal of Major Thomas Forsyth, a “special Indian agent” who accompanied Leavenworth up the Mississippi in 1819 with provisions for the troops stationed at St Peters (now Mendota) and $2,000 for the Dakota for landed ceded to the U.S. government under the terms of the Pike Treaty of 1805.  Forsyth reports on his brief camp time on Grey Cloud Island.

On the evening of the 20th (July), a landing was made at Medicine Wood (on or near the western end of Grey Cloud Island). “Medicine Wood takes its name from a large beech

tree, which kind of wood the Sioux are not acquainted with, and supposing that the Great Spirit has placed it there as a genii to protect or punish them according to their merits or demerits.” (Upham, pg. 621 sourcing the MHS collections 3:153.156)

Curtiss-Wedge goes on to write, and it’s not clear if he’s quoting Forsyth, that  “This is perhaps the first and only recorded instance of a beech tree in Minnesota and it might therefore properly have a “medicine” character, that term being Sioux for supernatural or deeply mysterious” (C-W, pg. 58).

What about that Beech tree?  The University of Minnesota Extension claims both the American Beech ( native – 65 feet – zone 4) and the Blue Beech (non-native? 20ft – zone 3 to 4) can make it here, though at zone 4, the American Beech may have been a historically rarer specimen.  Western North Carolina Nature Center claims Minnesota is west of the native range of the American Beech but that the tree flourished here before the glacial period.  A remnant?  An unusual outlier from its native land?  Apparently, it was enough of an oddity that it received special recognition by the Sioux as reported in Forsyth’s journal.  Chime in if you know more about this tree or its significance on Grey Cloud Island.  I’ll leave it here for now as a mystery, “somewhat solved.”

Grey Cloud Island and the places nearby warrant more “post” time and I’ll give you more on those environs next time. For instance, I never knew the largest nesting colony of Black-crowned Nigh Herons in the U.S. is right around Pig’s Eye Lake.  I’ve had some very good, and very close, comments trying to identify the historic site featured in Friday’s Mystery Photo.  It is proving to be quite a challenge.  If no one has nailed it soon, check in on Wednesday and I’ll include some additional “hint” photos. Thanks for the visit. See you next time. Corey