Hogan-wanke-kin – The Place Where the Fish Lies 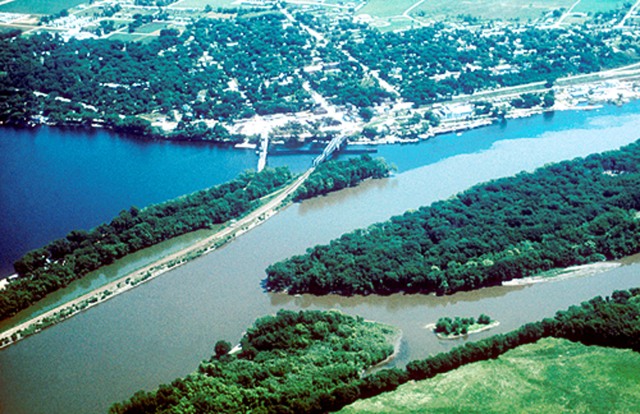 The widening of the St. Croix river above Prescott that you see on the far left of the photo runs nearly 30 miles north and is often referred to as Lower St. Croix Lake.  A similar widening at the headwaters near present day Solon Springs, Wisconsin is called the Upper St. Croix Lake.  Between these two often placid bodies runs one of the first federally designated Wild and Scenic Rivers in the United States.  Definitely check out the St. Croix History link at the NPS site for an excellent telling of the St. Croix story.  Another good read is The St. Croix – Midwest Border River by James Taylor Dunn which includes several chapters on Native Americans and Early European/American exploration of the river.  Dunn’s book and his own paddle from Solon Springs to St. Croix Falls were inspiration for the journey I’ll be taking this May.  My first paddle after moving to Minnesota was along the St. Croix by Wild River State Park.  Later, I fell in love with a portion of the lower stretches from Taylor’s Falls down to Stillwater and continue to paddle and fish there today (well, today, if it wasn’t frozen and snowing outside).  While living in Stillwater, Minnesota, these lower stretches were an easy way to get in canoe time while raising a family.  One of my young paddlers went on to complete YMCA\’s Widjiwagan canoe program no doubt influenced by her early experiences on the St. Croix.

“The Place Where the Fish Lies” 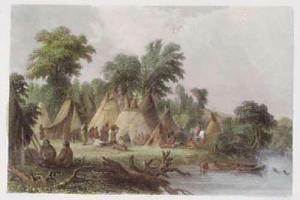 “The Dahkotahs call the St Croix river, Hogan-wanke-kin. The legend is that in the distant past, two Dahkotah warriors were travelling on the shores of Lake St Croix, one of whom was under a vow to one of his gods not to eat any flesh which had touched water. Gnawed by hunger, the two perceived, as they supposed, a raccoon, and pursued it to a hollow tree. On looking in, the one who could not eat flesh that had touched water, saw that the animal was a fish and not a quadruped. Turning to his companion, he agreed to throw it to the ground if he was not urged to eat. Hunger, however, was imperious, and forced him to break his vow and partake of the broiled fish. After the meal, thirst usurped the place of hunger. He called for water to cool his parched tongue, until the strength of his companion failed, and he was then told to lie down by the lake and drink till his thirst was quenched. Complying with the advice, he drank and drank, till at last he cried to his friend, “come and look at me.” The sight caused the knees of his comrade to smite together with fear, for he was fast turning to a fish. At length, he stretched himself across the Lake, and formed what is called Pike Bar. This, tradition says, is the origin of the sand-bar in the Lake, which is so conspicuous at low stage of water. Having full faith in the legend, to this day they call the river, which is part of the boundary between Wisconsin and Minnesota, “THE PLACE WHERE THE FISH LIES” (Hogan-wanke-kin).” (Edward Duffield Neill, The History of Minnesota: From the Earliest French Explorations to the Present (Philadelphia: J. B. Lippincott, 1858) 94-95. Found at Richard L Dieterle 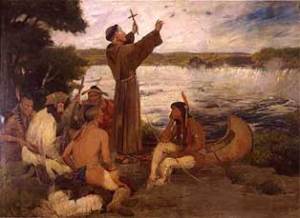 James Taylor Dunn cites a few possible sources for the re-named, St. Croix.  Father Hennepin who traveled with the explorer Du Luth in 1883 called it the Riviere du Tombeau ( River of the Grave or Mausolaeum) and it appears on their map of the exploration under this name.  In Hennepin’s words, “because the Savages bur’d there one of their Men, who was bitten by a Rattlesnake…and I put upon his Corps a white Covering; for which the Savages returned me their publick Thanks.” (Dunn, pg. 28)

Around 1700, members of Pierre Charles le Sueur’s party floated two explanations. One companion referred to a cross planted over the grave of a French voyageur buried near present-day Prescott, Wisconsin. Another credited the name to a French trader named Sainte-Croix who wrecked his boat near the same spot (Dunn pg. 29)

There’s further evidence to support a historical Sainte-Croix offered in a well-annotated re-issue of Pike\’s 1805 Journals published in 1895.  Regardless of the misty origins, the name appeared on a document of explorer Nicolas Perrot signed on May 8th, 1689 as the Riviere-Sainte-Croix, and since then, that name has stuck.

By the time Zebulon Pike paddled the confluence in 1805, the lower St. Croix and the Mississippi were already in steady use as trading routes with the Sioux and a bit further up the St. Croix, the Chippewa. On that trip Pike negotiated the purchase of two significant tracts of land from the Sioux.

The 1805 Treaty of St. Peters or the Treaty with the Sioux, better known as Pike’s Purchase, was a treaty conducted between Lieutenant Zebulon Pike for the United States and Chiefs “Le Petit Carbeau” and Way Aga Enogee on behalf of the Sioux Nation. The treaty conducted on September 23, 1805, purchases two tracts of land: nine-square miles each at the confluence of the St. Croix River about what now is Hastings, Minnesota and confluence of the Minnesota River with Mississippi about what now is Mendota, Minnesota, for the purposes of establishing military posts at each of the two sites. A military post was not established at the confluence of the St. Croix with the Mississippi, but Fort Snelling was established on the bluffs overlooking the confluence of the Minnesota with the Mississippi. Though the treaty was never proclaimed by the President of the United States, it was ratified by the United States Congress on April 16, 1808. (Wiki)  “Search” my posts under “Zebulon Pike”, “Pike Island, and “portage” for more of my writing on these subjects.

Well, when I make my left turn at Prescott, I’ll be on the “upstream” portion of the trip where I spent many a lovely day – usually floating “downstream.”  With a nice southerly blow (one can hope) the lower river up to Stillwater should feel less like fighting current and more like lake time. I’ll leave you with Mr. Pike at this juncture of two mighty rivers and see you again on yes, Mystery Photo Friday #7.  Guess the site of this week’s Mystery Photo and win the coveted “cotton swabs.” See you soon. Corey