Do you mean that just like at the horse track, I could win a bundle?    Pretty much.  A bundle of “swabs” that is.  Here’s photos # 1 and # 2.  This site is one of three possible launch sites under consideration this past month and filmed for this Mystery Photo # 11.  All three sites serve up a nice smorgasbord of public access to the river(s) – (hint).  One is a much used city park, one is a Minnesota Historical Society – Historic Site, and one is a Minnesota State Park.  All three, to some extent, are under the administrative umbrella of the National Park Service – ???????????  National River and Recreation Area.

#3 - One of several structures on this property - This may be the oldest of the siblings.

#4 - Across the street and railroad tracks

For those tuning in for the first time, here’s how the Mystery Photo Contest works.  Identify the site, or in this case, sites and describe them under “Comments” at the bottom of the post.  At week’s end, I randomly draw a winner from the correct (specificity helps) entries.  The winner gets a brand new box of cotton swabs.  Imagine.

She's all smiles here, but fact is, it took several swabs and a box of tissue to staunch the flow of grateful tears that followed. I on the other hand, look as if I'm having a vision of sorts.

Speaking of which, I had a chance to award Photo Friday #9’s prize, in person, to the proud winner, Diane of Minneapolis. Here she is at the presentation ceremony – the photo taken just before she broke down, sobbing for joy.  Below are photo sets #5 and #6.  These last two complete the Trifecta.  Correct answers to all three Mystery Photo sites wins the grand prize this week.  Not just the swabs but in addition (are you ready?), a carrying case for those swabs that Lois snagged at the thrift store.  Now you can have some at home and take some with you on your next outing.

#5 - Crimey, that could be anywhere

After this week’s contest and from here on out, Mystery Photo Friday will have a slightly different format. I’m pretty sure I’ll be unable to take photos by myself of the canoe on my shoulders.  If my technology doesn’t fail me, I’ll be posting from the river with fascinating sights along the way.  I hope you’ll keep up with those and keep playing along. 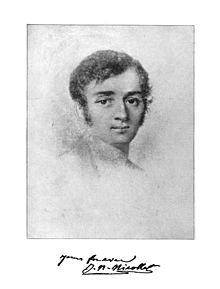 Okay, looks can be deceiving - I say, he had the "right stuff."

Wednesday, August 2nd, 1837  “I left St. Peter (now Mendota) at 9 o’clock in the morning with Mr. Aiken and Reverend Boutwell.  the canoe and crew are Mr. Aiken’s.  We entered the St. Croix at 3 o’clock sharp.  We traveled 42 miles in 6 hours (Wow).  The two or three mile section in the middle of the lake (Lower Lake St. Croix) is twice as wide as the preceding section.  The lake veers NW and NE.  the average bearing is N.  The hillsides are covered with red cedar mingled with birch and double-needled pine of a pitiful appearance.  Mr. Warren and Mr. Dube are in another canoe with a crew roughly the same size as ours.  It is  lovely night,  fresh, and without mosquitoes.” (Bray\’s Journals of John N Nicollet  pg. 141)

Of the pantheon of characters who have made an appearance in this blog, this fellow was motivated by more than fame and fortune.  He had loftier ambitions, that I believe exceeded many other Euro-Americans who have a prominent place in Minnesota history.  I’m not comparing Nicollet to notable Native Americans in Minnesota history though they too, I’m sure, were not foible free.  They include local heroes such as Aish-ke-bo-go-ko- zha, who bravely acted on behalf of his people at Sandy Lake (my post on this)  or women like Grey Cloud Woman, both mother and daughter, two powerful female Mdewakanton Indians making a life for themselves and children amidst the change of power in the Minnesota country in favor of the Euro-Americans (Duke Addicks – Storyteller)  – (my post on this ).  Fact is, a lot of early Euro-American Minnesota notables were after the dough.  Beyond that they had in multiple layers, some more prominent than others, service, recognition, and all other higher and baser instincts of character that we share to some degree.

Joseph N. Nicollet made his way to the States from France in 1832.  His intention, in his own words, aimed at  “contributing to the pregressive (sp) increase of knowledge in the physical geography of North America.”  That’s exactly what he did.  A math wiz, he was decorated with the French Legion of Honor.  He taught in France and was mentored by renowned astronomer and mathematician, Pierre Simon Laplace before relocating to the United States.  He spent the remainder of his productive life mapping the entire 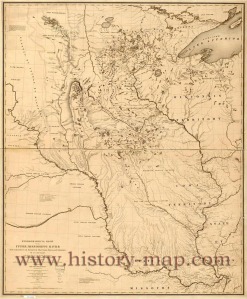 Mississippi River Valley including his masterpiece, the Hydrographical Basin of the Upper Mississippi. Without any United States official support, he began his “scientific tour” in 1832.   He worked his way up to and along the Minnesota and St. Croix rivers in 1836 and 1837.  He continued his mapping along Mississippi tributaries throughout Minnesota and returned to Washington in 1840 to compile his reports.  After some disappointing early publications the “mother map” was made available in its intended final form in 1843.  I have a reproduction on my living room wall and recommend it to any fan of maps and/or the land and rivers of our Upper Midwest.

Nicollet was interested in the ethnography and linguistics of the Native Americans settled in the area.  A real bonus of having this gem in your hands is reading the original Native American names for rivers and landmarks preserved on this map.  Most of these were renamed during early Euro-American expansion.   An example is the Wabizipinakan  Sibi, now called the Apple River and flowing from Wisconsin, near current day Somerset, and into the St. Croix.

“Wabizipin is a kind of fruit produced by a very prolific aquatic plant on the Mississippi.  This fruit is very useful to the Indians who eat it and call it swan potato.  Wabizipinak indicates the region where the fruit is to be found, hence Wabizipinakan Sibi, the river (Apple River).”  (  Bray\’s Journals of John N Nicollet ,pg, 143)

What a guy.  No blown up, self-serving, inaccurate chronicle of heroic exploits here.  Just inspired scientific research and a map recognized as “one of the greatest contributions ever made to American geography” (Lt. Gouverneur K. Warren of the U.S. Army Corps of Topographical Engineers).   I’m grateful to the Minnesota Historical Society for much of the content on Nicollet.  The informational sheet they provided with the map I purchased at St. Paul’s Minnesota History Center recommends the Bray edition of Nicollet’s Journal cited above as well as a 1976 edition of Bray\’s Joseph N Nicollet on the Plains and Prairies  – both of which they reference.

Which brings us too…..The Winner of the Mystery Photo Friday #10

Here’s a few more shots to help you out. 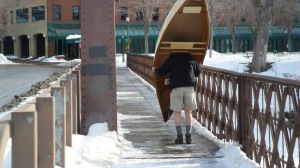 In her own words, this week’s winner, Mary of Minneapolis.  “Yep, Corey Bob, Dale Bob is right. That little bridge spans the narrow channel of the Mississippi from Nicollet Island to the Riverplace/St. Anthony Main side of the river. It wasn’t there in the mid seventies when Dick Rees and I first met, fiddles in hand, and spent many happy (unemployed) hours fiddling at the upstream end of Nicollet Island. At that time the bridge in question was the Broadway Bridge, and when Broadway got a new, big bridge, the quaint old metal one was moved downstream to its current Island location.”  Congrats to her and the other talented geographers who contributed the correct answers to last week’s Mystery.  All entries appreciated – anyone who writes their shriveled little heart out knows what I mean.

Next week will be the last post from the man-cave here at the “vinyl villa.”  From there on it will be as “live” as I can make it from the rivers and lakes to come.  On Friday, I’ll wrap things up and try to give a bit more on Equipment, Madeline Island and the Launch –    Sunday at 9:00 A.M.  Until then, keep your paddle in the water. Corey