Norton, have you seen Ralph, Trixie and Alice?

Every 5th grader in the state knows the answer to that one – “a stick.” Okay, here’s a more mature question.

My answer, “not much.” At least that’s how I felt at the conclusion of our tour of the Metropolitan Waste-Water Treatment Plant (Metro) located just southeast of St. Paul and abutting Pig’s Eye Lake.  Pig’s Eye, the more colloquial name for the facility seems a more spirited moniker for the place that deals with the mess that the metro-area population dishes up each and every day.  It reminds me of when the county changed the name of our old street from Grubb Road to 21345678th, all in the name of progress/image.  That aside, I was surprised to find how much fun it was to follow knowledgeable, dedicated, and humorous staff around their home turf and find out just how they do it – that is take our water, “poop” and whatever else we flush down the toilet or send down our drains and produce a final effluent that’s far cleaner than the river it’s going into. 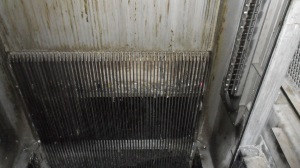 Bar screens remove the big stuff – in all its incarnations

It all starts with screens fitted with rakes that catch the big stuff which arrives in the waste water that comes from my house, your house and thousands of others.  All that “influent” arrives at the plant via 600 miles of underground pipes.  Then, conveyors (they looked kinda like the roller-coaster at  the Mall of America) haul it to another part of the building.  On a previous tour, a middle-aged adult asked something to the effect of, “Why do people flush so many balloons down the toilet?” To her and her husband’s growing embarrassment, the other tour members, mostly college students, with a great, failed effort, tried to suppress their smirks. Well, seriously now, all that “stuff” is carted away to landfills at this stage. Later on in the treatment process, higher BTU generating sludge and

scum are separated out and incinerated at extremely high temperatures resulting in energy that is re-cycled into plant operation. “What about nose plugs?” you ask.  “Leave them at home,” I say.  Huge fans and connected piping whisk away toxic fumes that accumulate at the surface of the raw sewage coming in at this first stage ( in the right combination of gases, this stuff could kill you).  The fans work effectively to export the foul air to a bio-filter that resembles a wood-chipped football field – or at least half a football field.  This was one of my favorite stops on the trip and Chris, one of our guides for the tour, had a hand in implementing this technology.  Basically the bad air is piped to 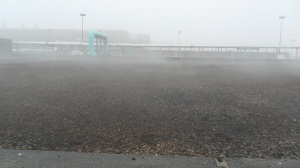 Leave you nose-plugs at home.

and released under the field of rock/gravel/chips/some other stuff I can’t remember/ and as it makes its way back to the surface is cleaned of 95% of the contamination responsible for the toxicity and “smell” of human waste. Bacteria in the bio-filter are doing all the heavy lifting.  All I smelled was the pleasant aroma of  wood chips. Community complaints about odor from the plant have dropped to near zero.  Now, before I veer off to the subject of contaminated stormwater, if you want to be able to sprinkle any upcoming party conversations with terms like, “Aerated grit chambers,” “primary clarifiers,” “anaerobic,” or my favorite, “dissolved air flotation thickeners,” don’t miss the two movies at the end of the post. There, you can complete your tour of Pig’s Eye where the process is better explained than I can do here.

The issue of why we don’t treat contaminated stormwater puzzled/nagged me both during and after the tour.  Metro handles the waste that goes down household/business drains and toilets – not the surface water that is captured by the storm

drains we see in the road.  That water makes its way to river through a separate system of pipes and sewers. The first bit is treated, the surface waste water is not.  The decision to separate the two was made a few decades ago – and cost figures in to a large extent.  Those kinds of decisions aren’t made at the plant level, it’s a metro and state debate.  It’s expensive to capture and treat surface runoff mainly because there’s a lot of it and to do so requires another infrastructure with huge tanks to store and treat the water before releasing it to the river.  It can be done, it is being done, (Chicago metro and others do this) but the price tag is high. Would we have cleaner rivers, streams and oceans if we did our part to clean stormwater in the St. Paul metro?  Of course, but at what cost?  Should we do it?  Would citizens be willing to pay?  Then again ,what’s the cost of not treating the run-off?  For a moment, picture the Exxon Valdez impaled on Bligh Island Reef back in 1989 and gushing oil into Prince William Sound.

A recent National Academy of Sciences study estimates that the oil running off our streets and driveways and that ultimately makes its way through our rivers to our oceans is equal to an Exxon Valdez oil spill–10.9 million gallons–every eight months.

About 2 miles downstream of St. Paul’s Holman Airfield and just 10 miles from my trip’s inception a stream enters the Mississippi through some trees on the left bank.  A short paddle up that stream reveals the source – and the end of our foggy, Thursday

morning tour.  Since 1938, the folks who operate Pig’s Eye (Metro)  have tended to our most basic need – clean water.  A salute to Christine and Laura (engineers and guides for the day) and the rest of the staff.

Is it time start thinking more about putting tax dollars to work on cleaning our stormwater and more importantly, changing behaviors wedded to our individual and national addiction to petroleum?  Here’s the log in my eye.  We have two cars in the garage and the monkey on our back as well.

Thanks for visiting the blog.  We’re going to ponder our evil ways (we do have bus passes now and use them), and I’ll see you in a few days with a post about the Mississippi’s Grey Cloud Island and its “super-natural forest.” Here’s the slide-show of our tour and Metro’s visitor orientation video. So long, Corey