Mystery Photo Friday – And the Winner Is….

Is it true that “you were only waiting for this moment to arise?” Well, perhaps your whole week didn’t hinge on it. My, my, my, seven correct answers to last week’s mystery photo.  They all went into the grab bag and but I’m afraid only one can take home the big prize. Other guesses included the Minnesota State Capital, the Chapel at Stillwater Prison, the Metrodome, and U of M’s Northrup Auditorium.

Am I higher than the State Capital building?

Okay, it was… St. Paul’s own, St. Paul’s Cathedral. What are the odds of that? 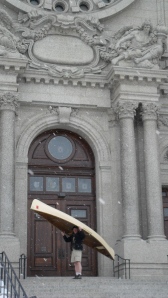 It was a very cold Thursday when this photo was snapped. Lois endured frozen finger tips and potential jail time to get those images. We sure had fun with the contest and hope you did too. Oh yeah, the winner. Each name was placed in a dark container then I reached in and picked one. This week’s winner is….Carol of Bayport, MN.  Congratulations! Your Q-tips will be arriving soon.  Now, here’s a bit about the Twin Cities #2 most visited landmark (thanks for that fact from our most far-flung contest entrant, Nancy of Cordova, Alaska). Construction began in 1907 but it wasn’t until 1915 when the building was completed that the first mass was conducted.

Archbishop, John Ireland, and catholic and architect, Emmanuel Louis Masquery are credited with having the vision for the grand building. On my recent tour of the historic home of railroad magnate, and “Empire Builder” James J Hill, our tour guide intimated that James was none to pleased with the building. His newly constructed mansion was but a long, stone’s throw away. Although he is often credited with funding it, Hill, a protestant, was less than enthusiastic about the construction noise and his compromised view. We were told that Hill offered Ireland 250,000 dollars to make it smaller. Fact or Lore?  It’s believed that Mary, his wife and a devoted catholic, was a major financial contributor – not James J. (Hill House tour staff)

I promised that this week’s photo would be a challenge. I hope you enjoy the chase. On Friday, I’ll include others taken on the same location. Until then, good luck. Next week, you’ll get a pig’s eye view of our metro area waste processing facility. Hold on to your seats – your Q-tips await you.

If you hazard a guess, please scroll to the bottom of today’s post and “click”  the ” comment” button. These comments will be posted in time and your private data kept private.

See you next week – Corey

17 Responses to Mystery Photo Friday – And the Winner Is….