Early, Wednesday, May 25th - Mawikwe Bay on route to Big Sand Bay. In the morning light and the light breeze, the water rippled like a large cauldron of orange chocolate sauce.

My last post celebrated the climax of four months of planning and one month of paddling the centuries old canoe trail from the confluence of the Mississippi and the Minnesota rivers to Madeline Island in western Lake Superior.  The two photos in that short entry tell only an abbreviated version of the grand finale – my final paddle strokes on day 26 and my wife, Lois (Jingles) and I on the beach at the landing – the duo that launched Paddlin’ Madeline in the cold days of January and completed the

trip on May 26th.  She may not have been in the canoe after Day I, but she was the wind at my back the whole way.  The “long version” must include the amazing friends and family who’ve encouraged us and celebrated all along the way as well as readers who followed the posts, and those who went on to comment and add their own experiences.  We also met new friends and old friends along the trail who enriched those days with their thoughtfulness and generosity – and when I was physically and mentally spent, those acts of kindness were strong arms around me and sweet nectar from the gods.

Lois posted on May 23rd   with photos that chronicled the portage to the Brule, paddling its length to the Big Lake and the 16 miles or so to the campground in Herbster – three and a half days of travel beginning in 10 miles of alder bogs at the Brule’s source and traveling through the seemingly countless rapids, large and small before meeting the breakers where the Brule and Superior join.  For “Flatwater Corey” it was a demanding stretch where my emerging whitewater skills were tested and honed and where each bump and scrape elicited an apology to Pelagie, my trusted water pony and promises of a make-over come trip’s end.  There were slippery portages around the ledges, a wolf watching trout rise in the bog, the newly storm-felled white pine that spanned the river, the copy of Schoolcraft’s journals left for me at Copper Range Campground by new friends in the Brule State Forest staff and more.  Did I mention the rain and thunder?  Okay, I will.  Thirty minutes of rumbling thunder finally convinced me to pull ashore my last day on the Brule.  Setting up the tent in the rain on a bank above the river, too close to to the water to feel comfortably settled with images of sliding into the dark water, tent, mummy bag, pines and all.  And I was too pooped after a day of portages and rapids to care enough to change a thing.  I couldn’t reach Lois and knew she was already worried about that stretch of the river and now probably more concerned because I couldn’t reassure her that all was well – or well enough.  Discouraged, I cranked up the portable weather radio, listened to the reports of the storm on the NOAA channel and then flicked to the FM band.  It was a re-broadcast of an Altan concert in Madison, Wisconsin on the show “Simply Folk.”  I listened to my St. Paul friend, Daithi Sproule, with his lovely Derry accent, announce and then sing the “House Carpenter.”  If you’re not familiar with the lyrics, the story has a watery ending to an illicit love affair.  Oddly enough, it was comforting nonetheless – that’s a good melody for you.   Altan followed with a medley of Irish tunes and an encore to boot.  I happily cranked and cranked on the portable, smiled and hummed along and with their final bows to the appreciative crowd also took my leave and and slept until dawn.  The next morning, still wet but encouraged, it was pack and go, 2 miles to Superior, then oatmeal and coffee at the mouth and a phone call to Lois.  The day already had enough good vibes to carry me through and it was only 9 A.M.

My launch into Superior was a wet one but once through the surf, the swells were easily manageable, the weather improving and my drysuit and Stanfields beneath, keeping me warm and comfortable.  A good map enabled me to follow my progress along the shoreline with confidence.

It was a foggy beginning on Superior but by noon the day had turned quite lovely. I'm heading into a bay in route to Port Wing.

From Port Wing it was on to Herbster for the evening.  Here I met Lindy, a great campground host who settled me in.  I washed up and made it to Woody’s Bar in time for a burger, fries and a few Goose Islands.  My high opinion of that burger will stand – even on further evaluation.  A late start for me on Tuesday, 6 A.M., I paddled the length of Bark’s Point and made an uncomfortable rounding into the next bay.  The wind was NE at nearly 10 MPH and with no land to mitigate the breeze, had the whole of Lake Superior to stir things up.  I beat it to shore once I was around the point, rested and strategized.  The wind seemed to have abated some and the bay looked calmer than it had.  I decided to push on to Roman Point. 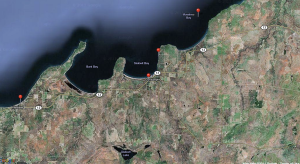 Cornucopia lies in a bay on the other side of Roman and tucked safely into the far corner, sea wall and all and the only official “Safe Harbor” between Port Wing and Bayfield.  Roman was as nerve-wracking as Bark and with the wind steady NE and waves pushing me in the wrong direction, making a course for Cornucopia was out of the question.  I struck across, mid-bay, for a nook out of the wind on Spirit Point (Squaw Point).  This crossing got nastier in the middle and I conjured two mantras as I paddled.  One went, “every wave could turn this boat over” and I repeated that to keep focused at the safe angle to meet bow and wave.  The second mantra went, “keep on your toes, take it on the nose”,  a variant of the first reminding me stay out of the trough.  I also promised myself that two of these Point/Bay crossings with this wind were enough for one day and I would not try another.  I pulled the canoe onto a large, flat boulder on Spirit Point in calm water just below a lovely home perched high on the cliff.  I was asleep in the sun within minutes and awoke with a somewhat scorched face to amazingly calm water all across the bay.  With these conditions I could round Spirit Point and perhaps make it to Meyer’s Beach or better yet, a lake-side campsite halfway to Big Sand Bay.  I paddled out from my safe haven and almost immediately felt a breeze in my face.  I paddled a bit further and noticed the water was getting choppy, not just ahead to the point, but behind me where minutes ago the water was flat.  I kept on and saw the chop ahead was interspersed with white caps.  As I approached the point I was looking at the same kind of waves and wind that had challenged my skills and nerve all day long.  I actually said out loud, “Corey, what did you promise yourself after the second crossing?”  I answered truthfully, turned the canoe around and surfed back to my calm cove and safe rock lair.  I waited there from 1:30 until 5:00 and with no substantive change in the conditions, pointed my bow towards Cornucopia, gave up a mile and a half of hard won territory and gratefully rounded the sea wall into calm waters and the promise of a campsite and a hot shower.  A good trade as far as I was concerned.  I was welcomed by Dave, co-owner of the  Siskiwit Bay Marina and shown a great spot to camp near the beach.  I knew there was a whitefish sandwich in my future if I could make it to the Village Inn just down the road before the kitchen closed.  Ah, sweet, deep-fried satisfaction.  I was not disappointed.

I’ll leave you with an image I shot during my three and a half hour wind-bound wait on Spirit Point.  Next post, I’ll return in the narrative to today’s opening image of dawn near the sea caves on Mawikwe Bay with an account of my last full day on Superior, a 23 mile paddle from Cornucopia to Roy’s Point in Buffalo Bay – just three miles short of La Pointe.  I’ve got a short movie of the waves and caves.  You’ll hear the eerie, oddly human, percussive sounds of water slapping into rock chambers.  See you next week.  Thanks for checking in.  Corey

If I stretch the latex wrist gasket over this here water bottle, maybe my hand won't go to sleep. Yes, I had a lot of time wind-bound to try out some new ideas.